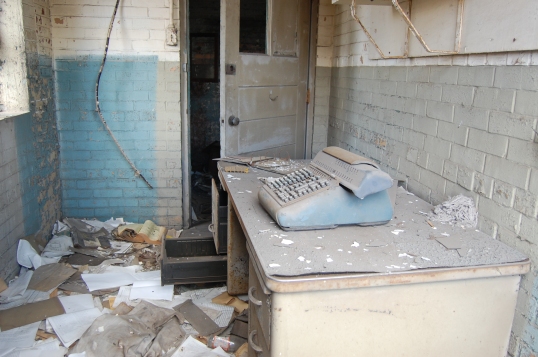 It doesn’t matter, he said sounding a tad strained. I just wish I could straighten up a little, that’s all. He tried for the millionth time to pick up one of the scattered cards or a stack of loose papers. They passed right through his hand.

See? Said the other. Why bother?

If I had some new file folders I’m sure I could make some sense of this. He continued to try to keep the desperation out of his voice.

Listen, he said hearing footsteps on the gravel outside. Here they come again.

He turned to face the broken window and smiled a wide gap-toothed grimace.

What the hell are you doing?

Smiling for their picture.

You know they can’t see you, right? You won’t show up. Look at the floor. You don’t even leave tracks.

I wish Miss Baxter was here-she could put this mess to right.

Why are we still here again?

The other sniffed and slowly diffused into a limp, spreading cloud of glimmering tendrils that rose toward the rafters.

Sighing but afraid to be alone, he allowed himself slip likewise apart and followed, trying to remember why he wouldn’t show up on film. He’d make him tell next time.

3 responses to “Left Behind”