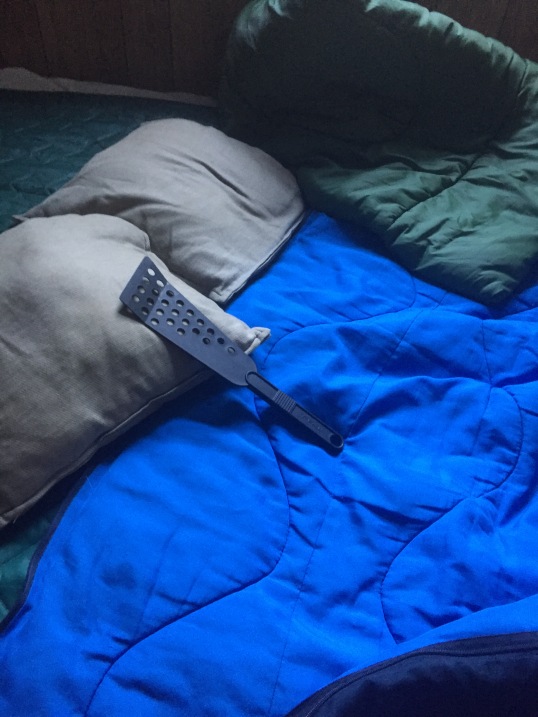 Sitting on the deck overlooking the river, he had to call this another Airbnb win. They’d been lucky finding spots in cities-New York, DC-but this was the first go at a more rural location. Cabin on the river for three days, eagles overhead, hiking, biking, river access-it was great!

True, Jenny had been on edge since they got here but it always took her longer to get into the swing of a vacation than him. He couldn’t wait to get here and jump into the canoe that was tied to the dock and head out onto the water. She had even joined him for a moonlight paddle-but still had been a little tight. Whatever, he had thought. He’d just wait for her to loosen up. He listened to the last calls of the whippoorwill that he’d heard all night and watched the fog rise.

He dumped the dregs of his cold coffee into the weeds and was about to head back into the cabin for another when he heard Jenny banging around in the well-appointed kitchen. ‘Banging’ was the only way to describe it: cabinet doors were being yanked open and banged shut-drawers were sliding open and banging closed. He sat back down on the deck chair deciding it might be best to wait a few before that next cup.

The crashing inside stopped after one last bang and he saw his wife step out onto the screened porch and stalk to their bedroom at the other end. “Morning, Jenny”, he called after her getting no response whatsoever as she disappeared into the bedroom. “What the hell did I do now?” he mumbled watching the spot where she had been.

The bed creaked as she flopped on it and he felt it safe to get up for that second coffee. Half way across the deck he was stopped by a sound coming from the bedroom. It was a light slap-not loud but unmistakable. Then there was another, then a third.  It was a sound he knew pretty well.

He actually tiptoed up the three steps onto the porch and over to the open bedroom door as the sounds increased in frequency and intensity. Soft little grunts and bedsprings squeaking kept time with the slapping sound. He peeked in. Jenny was face down into the pillows and, having pushed her blue panties down off of her rear, was slapping herself with a spatula that she had evidently found in the kitchen.

Her slim freckled bottom was reddening in the morning light. As she was right-handed, most of the blows fell on her right cheek but while he was standing there she did extend to deliver a couple of smacks to the left. She was breathing heavily with the effort.

She paused in her exertions.

She rolled onto her left hip and up onto her elbow. When their eyes met, hers were fierce and glistening. “When we were packing yesterday, you were bitching about how much I was bringing-like you always do and you remember what I said?”

“Uh…” he stammered, not remembering.

“I told you, I said…’I should stop being so bad’. Do you remember that?”

His eyes cut from her face to her white hip shining in the sun that was creeping through the window. Her panties, which she had hurriedly pushed down off of her bottom, bound tightly across her slim thighs where she crooked her right knee slightly.

“Last night, when we were out in the canoe I referred to myself as naughty. ‘Naughty’ Jeffery! But you were too busy with your fucking owls.”

“But Jen, that was a great horned owl we heard! We don’t get those back home. We only have screech owls and barn owls. Did you hear that deep ‘HOOOOT’…”

“Jeffrey! Focus please. When a thirty two year old woman describes herself as naughty it has very little to do with behavior. I mean, Jesus!”

He did focus then, pulling his eyes to the thick blonde bush peeking out above the stretched blue cotton. It disappeared when Jenny, in a final huff, flopped back onto her belly pulling the pillows tight to her face. Her bum was well colored on the right with little o’s from the holes in the plastic kitchen tool.

He set the coffee cup on the dresser and sat on the bed beside her.

He pinched the soft skin at the bottom of her bottom and wasn’t about to let go. “Sooner or later, bad girls get what they deserve.”

She pushed her bottom back into his pinching fingers and he released her. With both hands he pulled her panties all the way down and off-tossing them onto the floor then knelt and pressed his left hand into the small of her back. His first smack was firm covering most of her right cheek-the second swatted the left. There was a small strawberry blooming where he had pinched her and he slapped it. Then again. Jenny’s breathing was ragged and she pushed against the hand that pinned her to the bed-not to escape but to more completely offer her bottom to his punishing palm.

Being slim, her freckled cheeks covered none of what was between her legs. Especially not now as she gyrated into his slaps. He could see her swollen lips glistening in the soft sunlight and a little trickle down the inside of her thigh.

“Oh, my”, he said stopping spanking long enough to touch her there. She reacted as to a shock when he massaged her shimmering cunt. “I know what my bad girl wants…”

But because he was Jeffery, he had to make sure and dropped his Daddy voice. “You want me to fuck you now, right?”

She sighed slipping out of the moment. “Jesus! Maybe’s there a school we could send you to….”

He slapped her on the back of the thigh and she jumped pulling her knees up slightly to bloom backward. “Sorry…sorry…” she gasped. He slipped his shorts off and knelt behind her. Her wet softness opened to him and he sluiced in to the hilt on first thrust. Then he pulled almost completely out and drove again hearing the bedsprings squeal.

His body covering hers, his hands pinning hers, he nibbled at her ear as he slid easily and deeply in and out of her sopping pussy. “This is what naughty girls get” he whispered into the ear he was nibbling.

She mewed softly and flowed into his rhythm.