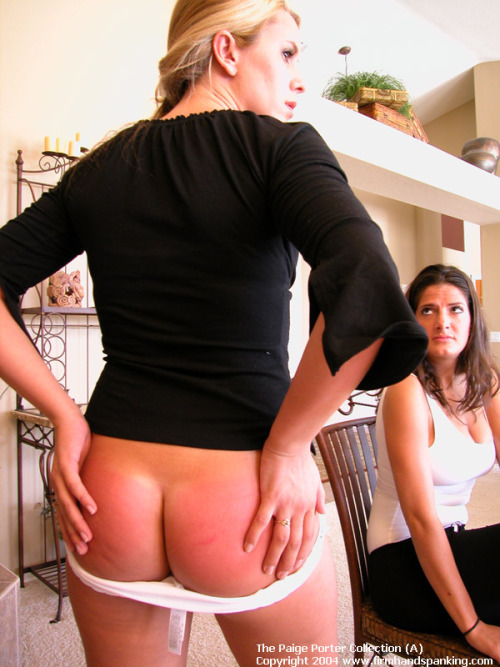 From http://www.firmhandspanking.com by way of Tumblr

Continued from “However…” Part I

Mary Elizabeth took a seat in one of the leather chairs in the small seating area around the bar, where Lynette lounged, one elbow on the marble surface like an extra in a western. Dana had to assume that’s where they remained because, to face Taylor where she sat on the couch, she had to turn her back on the ladies.

Dana had not come dressed for a workout. She had thrown on a blue nylon sweat suit on her way out of the house but it was more for lounging. Which is what she was getting set to do, she guessed. Or not. “You have to take those sweats down, dear.”

“Are you going to tell me that after a lifetime in gyms and locker rooms you are going to go shy on us all of a sudden?”

“No, no… I just didn’t know…” Taylor cocked her head to one side as if trying to understand what she was saying. “Nothing…never mind…” Dana untied the drawstring and allowed the loose nylon to slither down her legs feeling the air snake around her. It was now Dana’s turn to open her hands in a “Ta-da!” moment feeling chillingly exposed even in the warm gym. None of the others wore shorts-Lynette came closest with tight Capri’s.

“Very nice”, said Taylor. Figuring she knew the next step, Dana shuffled over to Taylor’s right side and noticed for the first time the rings she was wearing. Oddly, she wondered if she’d feel them. She was about to lower herself across her lap when the woman stopped her.

“Please dear…I do not spank panties. Even ones as cute as those.”

Dana shouldn’t have been surprised, but she was. She could feel the eyes behind her that would be looking at more than her back…She looked to Taylor to perhaps plead for some kind of mercy but the woman’s eyes seemed to have none of that in them. But her arched brow and dancing eyes seemed less threatening than…daring. Is that what this was? wondered Dana in the rapid fire synapses flickering through her head. Was this a big game of truth or dare? She was definitely getting a teenage pajama party vibe…maybe an…initiation? Was that it? An initiation into…what?

Dana’s revving brain froze at the sound of Lynette’s voice from behind her. “Her mind does tend to wander, doesn’t it Taylor?”

“Do you want some help with those?” Taylor asked looking up at her.

“No, sorry”, she said for what seemed to be the thousandth time and put her thumbs in the waist band of her panties and rolled them down. They clung to her-and only got as far as the tops of her thighs.

“That’s fine”, said Taylor reaching up for her hand. “Come on now.” Dana lowered herself across the woman’s lap. She wriggled a little to get comfortable-as much as that was possible-and pulled a pillow up under her. She tried not to think of the picture her bottom presented, being her highest point right now. Especially after Taylor pulled her panties further down. “There”, she said-happy with them at mid-thigh.

In truth, the touch of a woman’s hand to her bare bottom was not new to Dana. Not entirely common-and not recent-but not new. That woman’s hand spanking her bottom definitely was, though. She couldn’t remember ever being in this position-maybe as a child, no, definitely as a child, when they lived in that apartment and it was only she and her…”OUCH!” her reverie was interrupted by a sharp smack. Then a second. “OW!”

The third smack was the hardest and Dana gritted her teeth as the spanks fell, trying not to cry out but allowing gasps and muffled yelps. The stinging pain with each smack was something she expected, even something she deserved. She guessed. In this context. Of being over the woman’s lap and being spanked. She must have deserved it. “OWW!”

But what she didn’t expect was the feeling that was welling between her legs. Whether it was the heat building in her spanked bottom or the vibrations that Taylor’s hand sent south, where Dana had been dry scant minutes before was now beginning to dampen in a way it hadn’t, sadly, for months. She began to wriggle a bit against Taylor’s thigh, not so much to evade the next smack as to rub against something. Suddenly Dana coughed nervously-

“Wait? What? I thought I wasn’t hurting you.”

Taylor turned her bright eyes back to Lynette and Mary Elizabeth.  The three women in the room who were not face down exchanged knowing glances. Mary Elizabeth blushed, but winked in a vain effort to cover.

Goddam Taylor was right, thought Lynette as she poked Mary Elizabeth in the shoulder. “I think that’s our cue”, she said. Mary Elizabeth rose reluctantly.

Approaching the couch and Dana’s upturned bottom, Lynette poked her firm, pink right cheek with a perfectly manicured finger. Dana jumped at the feeling and registered another tiny zap between her legs. She heard Lynette tell her “You best not be late next week because I’m bringing my own paddle-and you won’t enjoy that half as much as you’re enjoying this.” She smiled then kissed the tip of her index finger and touched it to Taylor’s lips and the two of them took their leave.

Once alone, Taylor said, “I hope you don’t think you’re done” and slapped her with a crisp smack that cupped her cheek and resonated, vibrated, down her leg. Dana, alone with her tormentor, felt free to let her moans more fully form.

“Bring your legs together”, Taylor ordered. When she did the woman let fly with a tattoo of quick spanks to the bottom of the bottom so that the sounds and vibrations echoed down into the chasm between her legs, then deeper, settling into the warm wet folds of her increasingly needy pussy.

“Taylor!” Dana was breathing heavily and undulating over her lap.  “This is amazing…I don’t know…”

“Here let me help you”, said Taylor, herself breathing in tight little gasps. “…lift your legs…” When she did Taylor reached down and pulled first her sweatpants then her bunched white undies off of her feet and tossed them aside.

“Now you can spread your legs a little.”

The next spank was wide handed over her near cheek and Taylor allowed her hand to linger there. Allowed her fingers to slide down between. Allowed herself to feel the heat emanating from Dana’s pink bottom. Suddenly Taylor wasn’t interested anymore in punishing her charge but rather in something that was entirely different. And something that could have been her plan all along.

One response to ““However…” Part II”