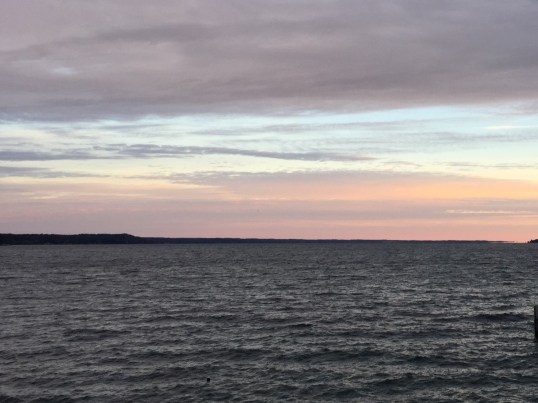 James stepped into the kitchen from the side door just as Ms. Olivia Plumm herself was placing little plastic containers into the refrigerator-each color coded with post-it notes. The kitchen-though neat as always-showed evidence of advanced food preparation. A neat mess, as it were.

Olive Plumm ran a very successful fitness studio in town and was Caitlin’s personal trainer, masseuse, meal planner and savant of all things physical. It was such an involving job that Caitlin was her only private client.

“Sweet Jesus, I’m dead and they’ve sent the most beautiful angel in Heaven to bring me home”, he said.

“If they sent me for you, Punchy, we’re not going up. Best be packing for the hot weather.”

At an even six feet, Olive cut a memorable figure around the lake. Most days-this being one-she went sleeveless to display her well-muscled arms and the tattoos that decorated and swirled around them. Blue eyes, spikey hair that she had been dying blue or silver for years and would continue to do so until she went gray so no one would know. Her gym, “Olive’s Twist” was always packed and busy and the classes she ran personally were wait-listed.

It wasn’t always that way. In the beginning, before she became what was probably the lake country’s first “celebrity lesbian” she was unsure about how she or her training regimen-as unique as she was-would be accepted either by the locals or the summer folk. James was one of Twist’s first members and he made it a point to work out in front of the windows happy to deliver whatever cache a county middleweight champ could provide. It was a kindness Olive didn’t quite understand at the time but never forgot.

“How’s our benefactor this morning?” he asked picking a fresh fig off the counter and earning a pantomimed slap on the wrist.

“Can’t wait to see you, that’s how. You’re her hero today.” She sniffed.

“It’s just that I’m on the short call list for when she finally catches onto you and puts you over her knee. That’s the day I’m waiting for.”

“Keep waiting. Patience teaches us things.” He was helping her load what was left of the produce into the refrigerator.

“Speaking of which, I can’t believe I missed Mrs. Fortescue’s session.”

“Yeah, well…you missed something there I’ll tell you.”

“Mmmmm”, she said zipping her carry-on size bag closed. “I have to spend more time over here.”

“That’s what I’ve been sayin’”

“Anyway”, she asked me to send you up when I was leaving. You saved me a trip down to the boat house.”

“That’s a path I wish you knew better…”

She closed the distance between them and poked him in the ribs. “You’re a bad one, James Cooke.”

“That’s what everyone keeps telling me.”

Catlin was in the drawing room right off her bed room. Fresh from the shower, a towel around her neck, she wore a loose fitting but fashionable black sweat suit. The envelope that he had walked out of Finnegan’s Wake with the night before was on a side table along with the note “Found this out and about last night…” Christ! Truth be known he didn’t even remember leaving the note.

“So this was the cause of the ruckus over at Finnegan’s Wake last night.”

“You heard about that did you?”

Caitlin gave him a look that a mother typically gives a 12 year old who things they’re being clever.  “James, please.”

“I heard he was big and fearsome.”

“Still…” she nodded at the envelope and cash. “Jane found it this morning. She was very excited. Thinks I should take her spanking back. If there was only a way to do that….”

“I would never be in favor of that…” James said.

“You! Nevertheless I’m sure she’ll have a big kiss for you when next you see her. Though you two are probably beyond kisses at this point.”

James looked at Caitlin who cocked her head slightly to one side-a small smile threatening to make an appearance. “You heard about that did you?”

“Didn’t hear about it. Heard it. This is a big house James, but it’s not soundproof.”

He opened his mouth to say something but didn’t. Just closed it again and cut his eyes away.

“Oh, it’s OK, you big baby. Don’t go pouting on me.” She moved closer without actually seeming to take any steps. “I just thought when you moved back it’d be me first into your pants, not Janey.”

She was close enough that he could grab her hand without having to really reach. “That’s the thing about you being first, Cait. No matter how many there are afterwards-you will always be my first.”

“You and the tongue…”

“Besides, if you didn’t want me to find my way into Mrs. Fortescue you shouldn’t have waved her bum at me.”

He could smell her lavender scented hair and the heat rising from her was not all from the shower. “That’s all it takes for you isn’t it James? A little bit of bum.” She took his hand and moved it behind her, placing it flush onto her bottom.

“How’s that feel?” She asked. Then, before he could speak with a sparkle in her eye, “There’s only one answer James…”

One response to “Handsome James-The Reward”