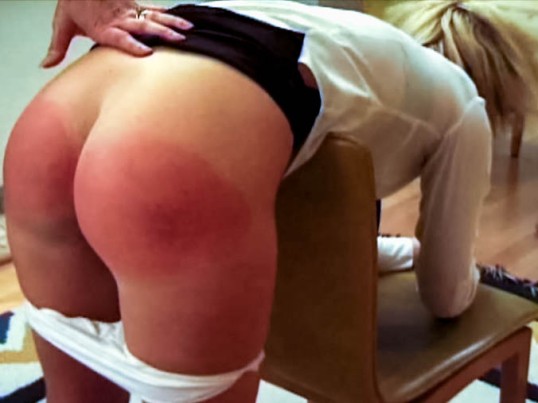 Lifted from “Across My Lap” on Tumblr

Continued from “Ms. Smythe will see you now“…

The AD was standing at the window behind her desk reading from a folder, her back to the room. “Sit”, she said without turning around. Bethany did as she was told, slowly lowering herself into the soft leather chair in front of the desk still limply holding the two almost forgotten envelopes in her hand. Her stomach churned when she saw the paddle lying on the side table. She turned her head quickly away as if-like a bad thought-ignoring it would make it disappear. That seldom worked.

Ms. Smythe turned with a small smile and, closing the folder, plopped it onto the desk. “Impressive Miss Flowers”, she said. “Your work here has been exemplary. You will leave here with the highest honors and recommendations.”

“But”, she continued walking around the desk to lean her slim backside against the table, “I have to say, you have a surprising number of write-ups and comments about your particular lack of….attention to detail, shall we say? Particularly as it applies to schedules and work being done on time.”

“Almost as if you are willfully disregarding the most basic rules we put in place here.”

“Are you staging your own little protest against what you feel might be…arbitrary guideline?”

The AD cocked her head slightly to one side in anticipation of an explanation she was pretty sure wasn’t coming.  After a moment of uncomfortable silence she went on. “I do see that AD Jackson never punished you at all for any of your infractions.”

“He did threaten you with a spanking?”

At the very word an icy chill spread through Bethany’s belly.

“Well, I must say that there is a part of your education that has been lacking.”

“I have to be honest, when I first saw your file, I took you for one of those girls. You know?” Ms. Smythe looked hard at her. She didn’t know. ”But you’re not. You’re not one of those who like it…who are looking for it. I can tell. There are enough of those let me tell you. And the boys-I swear-worse than the girls. They would plot and devise different things they could do-manufactured misbehaviors as it were-to find themselves bent over my desk. Or in some cases over my lap….They would ask for that…”

She pushed away from the table and picked up the instrument and Bethany’s heart sank. Was this really going to happen?

At first glance it looked like a yardstick but even Bethany, who knew little about wood, could tell that it was made of sturdier stuff. Oak most probably. There was a leather wrapped handle on one end and a loop where it could be hung from a hook. And there were no lines or calibrations on it. No, this tool was designed to leave marks, not measure them.

Ms. Smythe had a bit of a faraway look in her eye and a smile tickled at her lips. Holding the stick at rest at her side she went on. “And the most unlikely too. The captain of the soccer team-almost asking for a spanking when I was about to let him off…” Gwen smiled to herself at the almost slip of the tongue which would have changed the whole story. But Bethany was only half listening-trying to imagine Jim Thomas, the captain of their soccer team, with his carefully feathered blond locks lying bare-bummed across Ms. Smythe’s tight lap. It wasn’t a picture she could quite make right now. But even in her near frantic state, she filed it away to ponder later.

“You like?” she asked. “The dean at my last posting gifted me…” She brandished the stick in front of her like a swordsman hoping to catch a glow of sunshine off the blade. “It’s very effective” she mused almost to herself as she patted the wood sternly into the palm of her left hand.

Bethany’s heart raced and seemed to jump into her throat at the soft smacking sound coming from the assistant dean’s hand. How was she going to stand this? Her eyes burned and without willing it, a tear tumbled from her left eye and traced a streak down her cheek.

“A tear?” Gwen looked at her with a little concern. “Bethany, buck up. I mean my punishments often bring tears but usually after-or during-not before.”

She rubbed her eyes quickly with the back of her hands. “I’m sorry Ms. Smythe. Didn’t mean it….I’m just…”

“Shhhh…” Gwen’s cool citrusy smell, filled the space between them as she gently cupped the side of Bethany’s head…”Don’t worry about it, it’ll be okay. A trainer at the gym I used to go-who would devise the most torturous routines and workouts- said you can stand anything for three minutes. Right? This won’t take much longer than that.”

She stepped back. “Let’s get on with it then. Do you want Amy to come in?”

Ms. Smyth nodded toward the door. The little blonde at the desk. “A witness…?”

“Oh, God no!” Bethany blurted understanding. “I mean…no. Not necessary…”

“If you were younger it would be required…but we’re both adults here.” She shrugged. “Very good, then. Stand here…”

She pointed to a spot about a foot in front of her desk. Beth pushed herself out of her chair and shuffled forward on leaden legs. Thank heavens she didn’t have to walk far-her knees were actually shaking! At this moment she actually wished she might have been paddled before so she wouldn’t look like such a piker now.

Of course, she knew of other girls who were paddled and otherwise punished in her years here. She had even seen evidence in the fading welts on Karen Britton’s backside in the locker room after lacrosse practice one day. The sight-even the quick glance that it was-had set fluttering crows lose in her chest. The vision of Dean Jackson, her mentor through the four years here, putting her over his lap or over the desk never had even struck her as a possibility. Maybe that was the problem. Had he taken a firmer hand with her would she have so easily blown off the deadlines that had brought her to this? Betcha Karen Britton never missed an assignment deadline after that one time! If that was even what had caused her to be striped like that. Her mind was racing with too many imponderables and unanswerables. She was brought back to the present by Ms. Smyth’s voice.

“Ok-and your hands will go right here”, she said tap-tap-tapping a spot on the desk with the stick.

She didn’t have a terrible voice-not a harpy-but definitely not to be trifled with. There was a firmness in her tone-and her bearing. Bethany leaned over and placed her left hand on the desk and was putting the right down when Ms. Smyth stopped her.

“This stick is rather a licky piece but even with me swinging it, it doesn’t make as much of an impression through khakis. Trousers down please.”

Bethany looked back to find a hint on the woman’s face that she might be joking. That she really didn’t mean it. There was no such message writ there. Maybe her eyes showed a tiny glint of bemusement but her jaw was set. Bethany had to drop her pants.

She turned back to the desk and with shaking hands unsnapped and unzipped. They were tight enough that they wouldn’t fall so she slid them down slowly and carefully not to pull her panties with them. Oh GOD! Her panties!! All she had left in the drawer this morning were the…

“Cute”, said the AD with a smile, beholding the white panties splashed with bright red hearts of every size the largest emblazoned on the twin round cheeks. “And not even Valentine’s Day.”

“I’m sorry Ms. Smythe. I’m between washes and these were all that I had…”

“Not to worry. This isn’t one of those schools that you read about with “regulation knickers”. I’m happy you’re wearing them. You don’t know how many girls go without panties…not my cup of tea, I’ll tell you.”

Bethany was settling back over the desk trying to get used to the idea of standing here in her undies when the assistant dean’s voice chilled.

“Look Bethany. I’m trying to give you the benefit of the doubt here because this is your first. But really. You are going to get ten swats on your bare rear. You should know how to take it. When called to position you should lower your trousers AND your panties and bend over for chastisement. Without my having to coach you every step of the way.”

Bethany stood back up nearing a panic. “…But…” was all she could get out.

“I didn’t make the rules and you not knowing them is not my problem.” Ms. Smythe took a small step closer and Bethany, looking slightly downward, again noticed that she was taller than the assistant dean. Not really an advantage right now. “I’m going to give you ten swats across your bare bottom”, she said icily. “And if you don’t get those panties down now it will be twelve and believe me, you won’t enjoy the last two.”

“NO!…No…I’m sorry”, Bethany stumbled her eyes filling at being scolded like this. “Really Ms. Smythe”, she said turning her back again. “I meant nothing. Like you said I didn’t realize…..I’m sorry really.”

With that she hooked her thumbs in the elastic and slipped the panties down too hurriedly scraping a pink ribbon down her hip with a thumbnail. Once cleared of her fulsome bottom they fluttered to join her khakis in a pile at her ankles. Before they settled Bethany was bent over the desk-back rod straight-staring at the books on the shelves.

“Alright then…” she heard Ms. Smythe say a little gently and relaxed as much as she could hearing the change in tone. “Ten it is then.”