Barbara sat in the driveway and rubbed the tears from her eyes with the heels of her hands. “Christ”, she said aloud looking at herself in the rear-view. “Bobby’s here…could I just straighten up a little?” She picked the summons off of the passenger seat and jammed it into the glove box. What the hell was the matter with her? She slammed the car door and walked past her brother’s beat-up Jeep and in the side door.

“Bobby?” she called from the kitchen.

“In here”, from the living room.

He was sprawled on the couch with a thick textbook balanced on his chest. Bobby was her “little” brother in years only. He set his book face down carefully on the coffee table and pulled his six foot two inch frame to full height to give her a quick hug. “How are you Babsy?” he asked calling her by one of the names he used to tease her with as kids.

He looked at her shining eyes and mottled face.

She waved him off and asked about their mother. Barbara hadn’t been to the hospital in a couple of days but was planning to go later. Bobby, living at home now that he was finishing community college, obviously saw her much more often. Eileen was doing fine and would be home within the week.

She told him the story-she had been hanging around with some sketchy friends-one of whom was sipping from a can of beer. He handed her the beer to slip inside to use the bathroom and, quick as that, a cop had driven up. No amount of pleading would convince him that it wasn’t her beer and it wouldn’t have mattered anyway. She was holding it. Her “friend” who had handed her the beer saw what was happening and never came back. That would be a $200 fine that she didn’t have.

Bobby shook his head. “What are you, sixteen?”

“It’s a good thing Mom isn’t here. She’d give you the brush.”

“No doubt,” she answered with a smirk. “Then I’d be grounded. Which might not be a bad idea-the grounding I mean. Keep me away from the assholes.”

“She should have grounded you when you turned twenty one. Would have kept you from marrying the dick-head.”

“No, ex-husband. Probably still a dickhead.”

She laughed and relaxed a little. She didn’t know how it was in other families but this was a “no judgment haven”-no matter how often she got over here. Since the divorce she had been spiraling a little-keeping a waitressing job, just getting by- but made it a point to come over here every couple of weeks or so just to kind of reconnect with herself.

Sometimes Bobby was here, sometimes not. She’d visit with her mom, then go up to her room which had remained almost untouched for the last five years-and sit. Reflect. Plot her next move or rue her last one. Actually more of the latter these days. Bobby went to the kitchen to make coffee and they continued the conversation-with louder voices-across the rooms.

“So where did your latest ‘crime of the century’ happen?”

Bobby came back into the room, looked at the clock and grabbed his cell phone. “Chubby guy? One of those strawberry patches here, on his neck…?” he asked dialing.

He held up his hand.

“Hey Rick”, he said into the phone.

Barbara sat back and listened to one side of the conversation. Apparently mall-cop was only a part time gig for this guy who was in some classes with her brother. They seemed to be friends and exchanged pleasantries about school until Bobby got down to it.

“So Rick…you busted a girl today? Yeah…Open container….What? She was hot, huh?” He winked and listened for a few moments then smiled…”Yeah-yeah-I know.” Barb raised her eyebrows, mouthing “What?” Bobby held the phone away from his face-“You have nice tits”, he mouthed back. She covered her eyes and shook her head. Then, just like that, it was over. The cop couldn’t have known she was Bobby’s sister because she still was going by her married name. There was some laughter, it was a misunderstanding. “Sure”, said Bobby. “I get it…and we really appreciate it.” He hung up and that was that. The summons was history.

“So there-I got you out of a spanking when Mom gets home”, he teased.

“Oh Christ, don’t tell her about this cause I wouldn’t put it past her.”

“My lips are sealed.”

“I can’t believe you brought that up. You know…I used to get so embarrassed with you here in the house when I was getting spanked. We were in my room I know-you couldn’t see anything-but you hearing that? It was mortifying.”

“It hurt like hell! I couldn’t help myself from crying…She was tough. And the frustration of knowing there was nothing I could do about it! That was the worst! When she said it was going to happen, it happened. Sometimes the waiting was the worst. She would call from work about something I did-like the time she found out that Jim was over here when she was over at grandma’s when he wasn’t supposed to be. She told me I better be ready because when she got home….Jesus, I cried waiting for her. But you wouldn’t know anything about that, would you? She wouldn’t spank the baby.”

“Maybe I was just a good kid!”

“You weren’t that good-just had her fooled. But I think it was a boy/girl thing-she figured you were a guy, you’d make it on your own and figure your own shit out. Me? She figured I needed some…guidance.” Barb shrugged. “Maybe she wasn’t wrong.”

“When was the last time? That she spanked you. Weren’t you like a senior?”

“Yes”, she remembered. “I was still 17 though. She made a thing of saying I wasn’t an adult yet.”

“That one was special.”

“That one was different.”

Bobby thought about it for a second…then another. He was trying to weigh how much to tell and how much to keep.

She leaned toward him. “Bobby? How was it special?”

Oh, the hell with it, he thought. “When Mom spanked you, usually, she would make you lay on the bed and she’d stand beside you with the hairbrush…”

“Not really spying…Spying infers extraordinary measures. All I did was look through the keyhole.”

“Sure, it was easy to see-but the way your bed is, I never could see much. Could hear everything but all I could see were your feet. Sometimes your calves-kicking with every swat…Sometimes Mom’s leg where she was standing…”

“I can’t believe you spied on me!”

“Like I said-I didn’t see much. Heard a lot-and I have a great imagination.”

He laughed gently as she held a pillow over her face.

“But that one time…when you were a senior…”

She looked up from the pillow, in wide-eyed horror. “Mom sat on the end of the bed…”

“My ass was pointing directly at the door.”

“Oh my God…” her cheeks flushed.

Her brother’s smile cracked his face wide open and his eyes danced with the memory.

“That was the most amazing….It was probably the highlight of my boyhood.” He pointed to his head-“All locked up here for a lifetime of viewing pleasure….”

“That’s why I don’t drink”, he teased. “I can’t chance losing the brain cells that might rob me of that vision.”

She kept her eyes tightly closed for a moment then…”Wait. Do not tell me you beat off to the memory of me getting spanked.”

She threw a pillow at him. “What a little pervert you were!”

“Perverted boys grow up to be perverted men.”

Setting the pillow aside, he cracked “I’ll give you that.”

She scrunched her eyes afraid of the answer to her next question. “You didn’t tell anyone about it did you?”

“Come on! Nobody beats off to my sister’s bare butt but me!”

She roared with laughter and attacked him with another pillow. He covered his head and laughed under the onslaught. After a few whacks she rubbed the pillow on his face and collapsed onto the couch beside him as the laughter subsided replaced over the next few moments with a warm smile.

“Glad I could provide the service.”

She nodded at the book. “You have a test tomorrow? “

“Later this week. Just trying to stay on top of it.”

“Well”, she said getting up. “I’ll leave you to it. I’m going to go upstairs for a bit.” She leaned over and kissed him on the forehead. “Thanks for that-getting me out of that. Even if you’re a perverted spanking spy. I’m not going to have to date that cop or anything am I?”

“I’m thinking you’re in the clear…”

He stretched out back on the couch with his book and Barbara headed for the stairs. 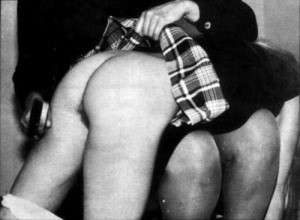 Not to be confused with the Faerie Keyhole, which is another thing altogether