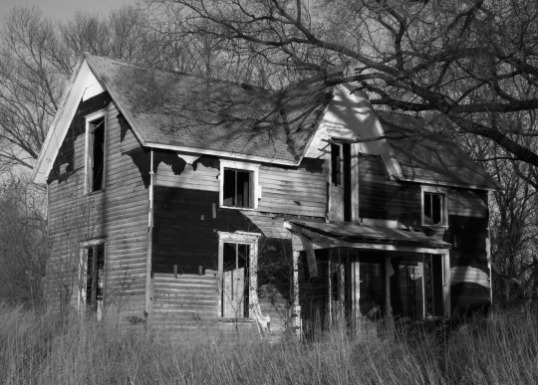 Careful not to move lest the creaking give him away, he sat stiffly in the old ladder back chair studying the cracks in the linoleum floor. She knocked again, rattling the door. “I know you’re in there. I heard you turn off the radio just as I was coming down the hall.” He glared at the offending contraption on the bare dresser top. Why’d he even deal with it? Nothing but holy rollers and static came across out in these parts.

“You know, I’m just extending a courtesy. I have my own keys here,” he heard them clattering and imagined her holding them up and jingling them in the air like little bells. “I’ll jist let myself in.” She didn’t. He could see her unmoving shadow below the door.  The thought of her standing in the hallway waiting for him was suddenly worse than the idea of letting her in. He half-stood and reached to pop the lock. The room was small enough that he was back in the chair in time to see the knob turn.

She was a tall woman. Slim but hardened. Her sleeveless house dress revealed little, but her calves looked strong and her arms were sinewy and sun marked. Since he had lost his job he’d had plenty of time to see all that she did around the place: the never ending washing and hanging, the constant tattoo of her flat shoes on both set of stairs, the cooking, hauling wood for the stove and managing that infernal wood pile which somehow seemed to grow the more wood she burned. He imagined she had wood delivered and didn’t split it herself, but he’d not put it past her.  But whoever delivered it, just dumped it in a jumble. It was her that stacked it in the wood crib out of the weather.

The one time he had watched her doing that, safely hidden by the curtains from his window, she was wearing jeans and an oversized man’s shirt. And work gloves. She knew her way around hard work was all he knew. That’s the exact thing he was thinking looking at her feet just across his threshold: “She knows her way around hard work.”

“What was it again? That you’re waitin’ on?”

“The last government check. The final settlement…on my…”

“Oh yeah, I ‘member now…yer ‘service settlement’ you called it?”

She cut him off. “I heard this before. You playin’ me a fool?” she asked sharply.

“Shut up! Don’t say another word.” If it was possible to drop his eyes further without completely expelling them from his head, he would have.

“I talked to people…” she went on. “Some who put in service time…some who were even overseas and they never heard of a settlement like what you’re describing…some sort of magic money that shows up months after you mustered out.” Her feet hadn’t moved-he assumed her arms were folded across her chest but didn’t dare to look. “The way these fellas talked it got me to thinkin’ that maybe you was feedin’ me a load a manure. That maybe you thought I didn’t know any better than to jus’ swaller what you was shoveling. Is that what you thought?”

“Okay. So here’s what I’m gonna do. Me, I’m thinkin’ you’re a liar two or three times over. But that’s just me sayin’ it. I wanna hear you say it.”

She let the silence settle for a moment before speaking. “Okay again. Now you’re a liar four times over.” Her arms were indeed folded over her chest and she squeezed hard with her right arm over her left to keep her voice smooth. “Here, let’s do it this aways, since you’re not going to call yourself a liar. Maybe you don’t know what a liar is, I don’t know. So here-this is your chance to tell me-one last time-about this money settlement you’re getting’ from the government. This is the time-tell me in all the detail you can. Or don’t. If you don’t-if you don’t say nothing about it-if you just don’t say nothin’, then I’ll know it was all horseshit and you was feeding me a line. Right? So, if you got nothin’, if you’re waitin’ on nothin’ say nothin’ and we’ll put that to bed. Right? Got it?”

He opened his mouth just a touch, then closed it. Opened again-then closed-like a fish tossed up on the bank. He gave up. Yes, it was a lie-the whole thing-he was trying to buy some time until…until what? He’d just pack his bag-wasn’t much to pack-and leave. Send her money from the road, when he got another job. Thing was, jobs was so scarce in this part of the country-he’d probly have to go north and most of his people-what were left of them anyway was down here-and this is where he was comfortable-Damn, why’d  he have to tell the foreman to fuck hisself-his temper belied the person he really was and wanted to be…

As his mind slashed from one ill-formed thought to another, the heavy silence filled the room like a blue gray stench. It covered them both and filled out to all four corners. It weighed on the bed, even pushed the curtains out against the window panes and, as it went on, seemed to dim the sunlight streaming into the room. She didn’t speak until the silence threatened to suffocate them as totally as if they were lying in the bottom of a lake.

“I oughta whip your ass”, she finally said.

“You ain’t gonna whip my ass.”

“You might be grown, but you’re sure not a man. A man finds a way to deal with his responsibilities. One of which is paying for the place that’s beddin’ and feedin’ him. Look at me”, she said sharply. “I’m tired of speaking to the top of your head.”

He looked up into her dark deep-set eyes, flashing at him from above high suntanned cheekbones. She had a lean wolfish look that would have made her stand out in a school picture as gawkish,  surrounded by a class of round headed cherubs but now gave her a honed, striking appearance. She took a step closer to loom over him slightly. He thought about standing up but he’d bump her she was so close. He craned his neck back. “How old are you?” she asked, hands on hips now.

“Twenty-six”, he said, not particularly proud or ashamed of the number. It was just that-a number.

“…So I’m not twenty years older’n you. Guess you could say I’m old enough to be your Ma. But I don’t know how old she was or is. And I don’t care. What I do know is that I’m old enough to do what I’m gonna do.”

“You ain’t gonna whip my ass.”

“Where’s it comin’ from? You gonna git money by sittin’ in this room half the day staring at me out the window? Oh, I can see you fine up here. Those curtains don’t hide much. Or maybe you’ll git money wanderin’ through town like you do the other half the day? How’s that pay?”

He couldn’t take staring up at her anymore and dropped his eyes back to the floor-this time gazing at a space between her feet. He thought of the phrase “too close for comfort” and she was definitely that. She had a strong scent to her-not unpleasant-but strong of wood smoke, lye soap, earth and a little touch of sweat.

“You ain’t gonna whip my ass”, he said with much less conviction than he had before.

“That’s fine,” she said. “It’s your ass-you should have some say in what happens to it.” Would that she had lived for the last fifteen years in such a world. She hadn’t of course but that was over now. “Since you were so good with the liar-game we played, I have another for you. I’m going down the hall to my room to get a belt. When I come back you will be either”, She held up her thumb, “One-packed and headed down the hall and out of my house still owing me two weeks board or…” flipping out her index finger “Two, laid out on this bed with your pants down ready for your whippin.”

“You ain’t gonna whip me…” He said softly almost like a rote prayer murmured to hold off whatever misfortune he was running from.

“Like I said, that will be your choice.” With that, she turned and left the room leaving the door open behind her. He listened as her steps faded down the long hallway.

She shortened her stride, aiming to give him time. She turned the glass knob and entered her room which was no more than a double version of the one he was in. The bed was larger and there were two chairs, though only the one on her side got sat in anymore. The other had an old felt fedora hanging from it that was too moth eaten and weather beaten to be much of a hat. Which was fine since there was no longer a head to fill it.

She opened the closet door and took the thick brown leather belt from its hook. She folded it once and held the narrowed end and the buckle in her right hand. It was heavy but supple to the touch.

Being on the receiving end, as she had been so many times, was different than being on the giving end. She could figure that. She knew what the cracking slash felt like, the dry leather burn across her bare backside or legs that left welts and bruises and the feeling that the skin was so tight and burned that she couldn’t put her drawers on. She knew how that all felt-the memories were still clear on that. Would probably always be. What she didn’t really know was how to actually do it. Obviously she was always facing away when it happened and had her eyes closed anyway.

She looked at herself in the mirror hefting the belt slightly. She looked closer, at her face, and pushed a strand of loose gray hair behind her ear. The gray had really begun to shoot through in the last year. Had she really told him she was twenty years older than him? She shoulda said ten. If she’d planned this, she might have taken the time to comb out her hair a little so she didn’t look so damn….haggard. She stood more upright-tossed her shoulders back. The hell with it.

She turned away from the glass and, with a single strong motion, whipped the belt over her head and down onto her bed. It landed with a satisfying WHUMP! Her heart fluttered a bit and she’d be lying if she didn’t admit to a little heat down below actually thinking about what she might find when she got back to his room.

She expected him to be gone. She thought maybe that she hoped he’d be gone. But carrying the belt slowly down the hallway put the lie to what she expected….

One response to “The Landlady”